Rất tiếc, mục này chỉ tồn tại ở Tiếng Anh (Mỹ). For the sake of viewer convenience, the content is shown below in the alternative language. You may click the link to switch the active language. A sex educator shows students at a Hanoi school how to use a condom. Photo: AFP
Huong, 20, has had two abortions in two years. No one had ever talked to her about
sex: not her parents, not her teachers – and her friends knew as little as she did.

“I was terrified when I found out I was pregnant,” she said. “I think if we had been told about safe sex, we would not have fallen into this trap.”

Huong is not alone. A lack of sex education at home or in school has resulted in some young people in
Vietnam relying on abortion as a form of birth control, experts say. 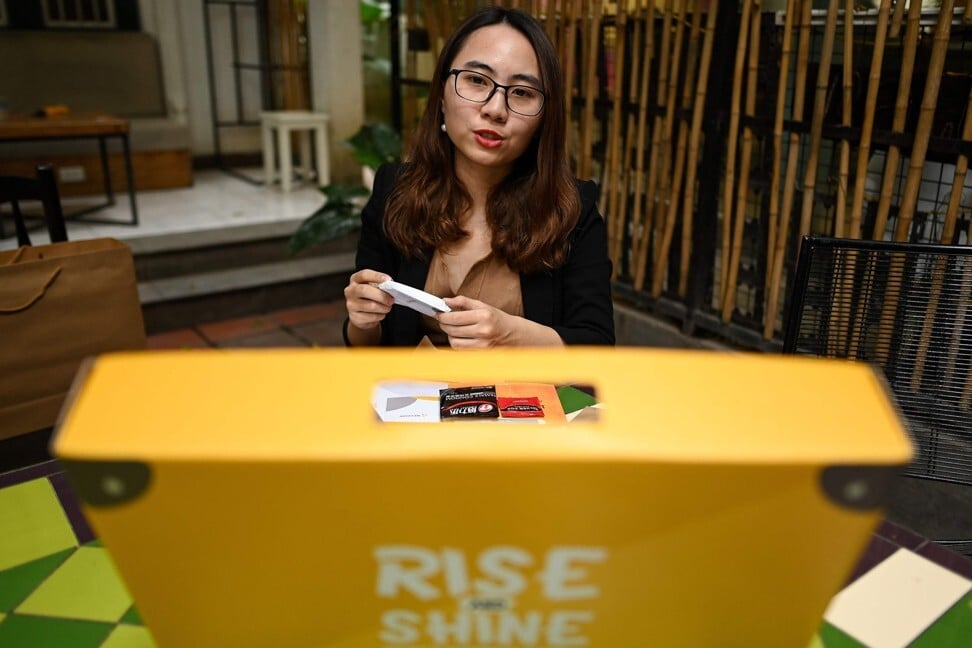 Talking about sex is “sort of forbidden”, says Linh Hoang, 23, who is on a mission to change outdated attitudes in a country unused to open discussion about sex or gender identity.

Vietnam has a young population and their sexual values have jumped the conservative barriers of a Communist country, with dating apps, condoms and abortion pills easily available.

But the generation gap has left young people without information and support as their sex lives evolve.

Parents edge away from the topic of safe sex and society “has no idea what sex education is and how to do it”, said Linh, who recalled her own biology teacher attempting to cover reproduction without explaining what sex was to a group of confused 13-year-olds.

Together with three friends all in their early 20s, Linh runs sex education start-up WeGrow Edu from a co-working space in Hanoi, where they stash gift boxes filled with sanitary pads, pregnancy tests and condoms – as well as vital guides on how and when teens might use them.

“It’s not difficult to get contraception in Vietnam but the social stigma around it is so heavy,” she said. 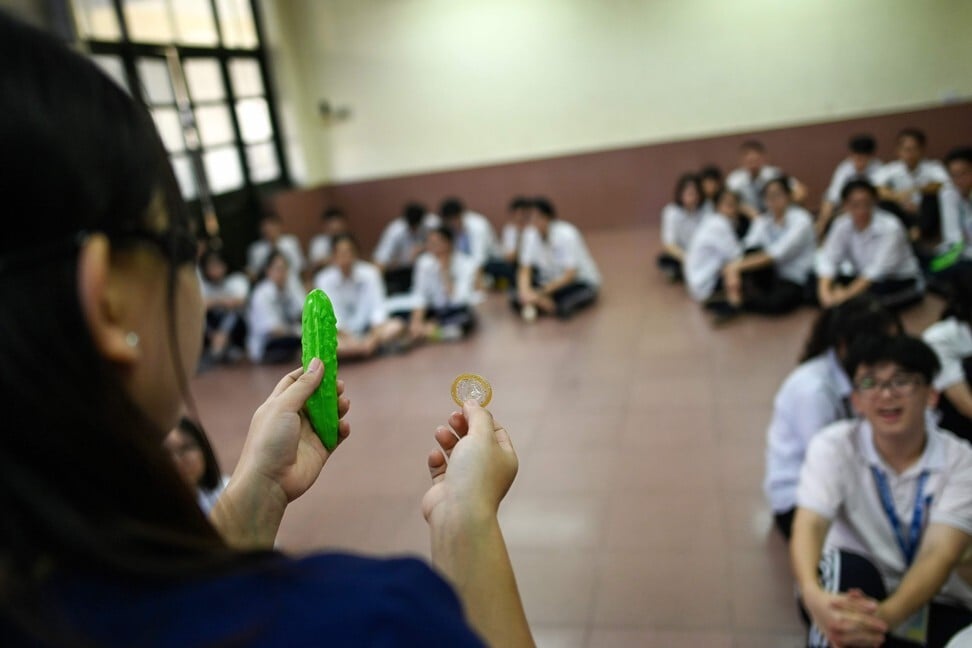 Trinh Huong Ly shows high school students how to use a condom at the Nguyen Tat Thanh High School in Hanoi. Photo: AFP

From demonstrations on how to use a condom to more nuanced discussions about gender roles, WeGrow Edu’s classes aim to deliver essential information to Vietnam’s youth.

For decades, Vietnam enforced a two-child policy but had little comprehensive information on reproductive health and no access to free family planning services.

That led to one of the world’s highest rates of abortion, according to the Alan Guttmacher Institute, a sexual health non-profit organisation. 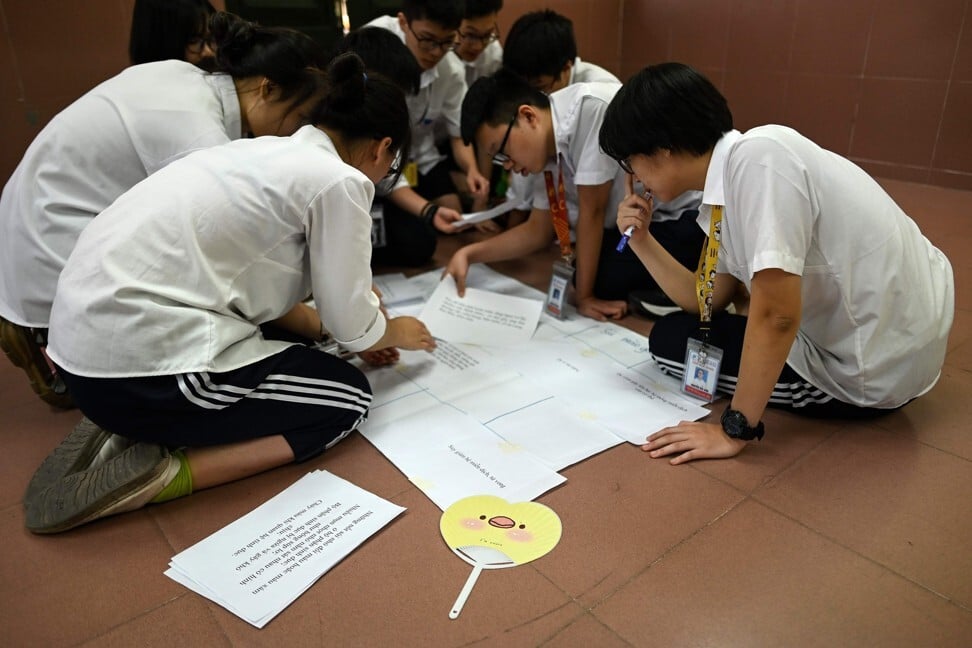 The scheme was scrapped years ago and condoms are now cheap and available at almost every supermarket and pharmacy. While abortion pills – meant to be signed off by a doctor – are also on offer in some chemists prescription-free.

In 2005, there were 37 abortions for every 100 babies born, according to ministry of health data cited by the United Nations Population Fund (UNFPA).

By 2019, the official figure had dropped to 12, although the UNFPA says the actual number is thought to be higher given a quarter of abortions take place in private practices.

Huong, a pseudonym to protect her identity, said she had no idea what to do when she discovered she was first pregnant aged 16, after having sex with a friend, and had to ask an older girlfriend for help.

“It really hurt. (After) I felt … so insecure and empty,” she said of the procedure at a private clinic.

She later learned a little about contraceptives when dating her boyfriend, but not enough to prevent her falling pregnant again at 18. She was able to use easily accessible pills for the abortion. 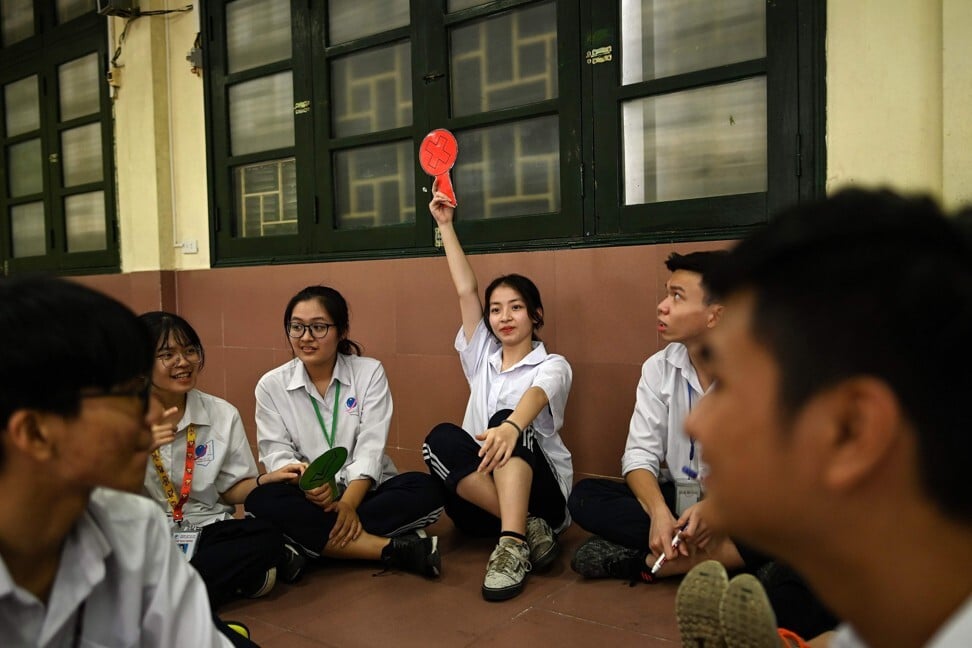 Nguyen Van Cong, a 33-year-old doctor and founder of health education programme “We Are Grown Up”, said his team had taught thousands of school kids about safe sex and birth control to combat the “worrying trend” where “abortion is considered a contraceptive method”.

While society has become more permissive and young people have discarded taboos surrounding premarital sex, Cong believes parents and teachers “are always scared” to discuss the topic for fear of encouraging sexual activity.

“(Adults) mostly try to avoid talking to us about the topic,” says Ngo Quang Huy, 17. 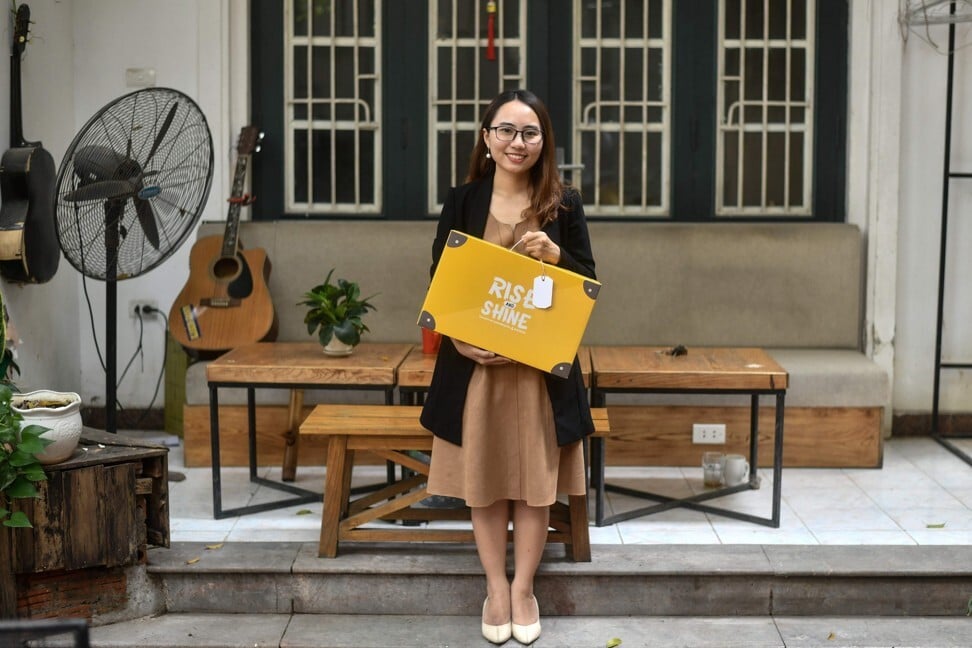 WeGrow Edu, partially funded by the US embassy in Vietnam, is now working with about 20 schools in Hanoi.

As well as their gift boxes with contraceptives for teens, children as young as four are given books explaining the basics of consent.

And while the boxes are priced at US$50, way out of reach of the average Vietnamese parent, Linh said demand is high.

“Even my friends, when they first received the gift box had to confess that it was their first time touching a condom,” she explained. “And that’s the case for most people.”

Want to join the discussion?
Feel free to contribute!